March 19, 2017
The dreary of winter. Especially for those of us that live in the northern parts of the United States means five months of little car fun. Except for one weekend in March when the Amelia Island Concours d'Elegance brings about the beauty of an early spring and revitalizes the heart and spirit of the car enthusiast.

Marking my second year attending the Amelia Island events included a visit to the RM Sotheby's auction held at the Ritz Carlton.

Having covered several RM Sotheby's Auctions in the past, I have a soft spot for the Amelia Island sale as there is generally a wide selection of the European sports cars I am so fond of. In particular those with a prancing horse on them. No, I don't mean Ferrari. The other prancing horse, Porsche.

There was an incredible selection of both vintage and modern classic Porsche's to choose from.  A standout was lot #264, a 1973 911 Carrera RS 2.7 Lightweight. I'm a sucker for long hood 911s, especially when decked out in race trim. And this particular had the right look and the rarity. While not a race prepped car, it could have been. It was one of the first 500 Carrera RSes built and on of only 200 lighweight examples built. Being sold at no reserve it hammered for an astounding $869,000!

There was a selection of late model "Transaxle" Porsches that caught my eye as well. Lot #211, a 1987 924 S. Being the last year of the car that saved Porsche, 924s have been on the rise in recent years. This low mile, all original example sold just under the low estimate at $19,800.

I also ran in to an old friend of sorts. Lot #119, the 1938 H.R.G. Aerocoupe. This car was restored by my close friends at Hahn & Vorbach Restorations over a ten year period. It later was displayed at Amelia Island, Pebble Beach and the Petersen Museum. It's very special 1 of 1 car that would be the prize of anyone's collection. It went to a new home for $176,000

There was also a world record sale in the house. Being a Volkswagen enthusiast, I was smitten with lot #294, a 1963 Meyers Manx dune buggy. Having known Bruce Meyers for several years now. I would love to add an original Manx to my collection. This example, while very nice didn't fit the bill of how I would build mine. This example was said to have undergone a recent $44,000 re-freshening which I was unable to see. I looked closely at it, but could not see anything that would add up to that figure in terms of a restoration. It sold for a world record $68,750! Could this be an upward trend in dune buggy collectability?

Lot #269 was a Ferrari that I fell in a love with. A 1971 365 GTB/4 Daytona Berlinetta Competizione Conversion. Originally a street car turn competition model which saw no race use at all. It's a very unique car with a great history with documentation from Luigi Chinetti.

This was only a sample of the cars. And every year, the RM Sotheby's folks manage to top the consigned cars. I can't wait to see what's in store in Hershey later this year. 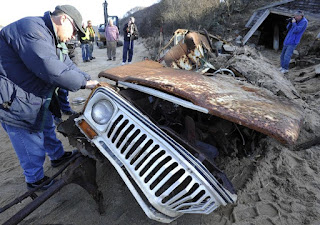